A miniature of djembe drum-dance performance

This is a studio-recording session that was spontaneously hijacked by a group of female passers-by, who were on their way to the nearby river, some for washing clothes and others  bringing fishing nets. The women re-interpreted the situation as a public celebration. What followed was a very short, yet nonetheless full-fledged djembe drum-dance event en miniature. One lady starts to sing a song, which calls up the corresponding drum ensemble rhythm and dance. The term for "song" in the Mande languages, dònkili, literally means "call to dance." Everybody who feels addressed by the rhythm and song joins the dance. In this case, the piece Suku calls to female adults, not the children who sit by and watch; it always depends on the particular piece who does feel addressed, and who else not. The dancers form a line and march round the dance-ground in a single file. When they feel that the song and group-dance has had enough space and attention, they change gears and go into the "hot" dance mode, which makes up the second part of the piece. That change occurs at 00:45 min in the video clip. Now, each individual in the group of dancers gives a short and energetic solo dance performance. When everybody had her turn, the piece is done (1:15). The drummers could have stopped now, but instead decided to change the rhythm from Suku to Farabaka, which is a super-fast piece that often follows Suku in sort of a suite of rhythms (1:30). Indeed, the drummers succeed in calling back some of the dancers, who already were about to leave. They dance hotly for another half of a minute -- and then it is done. This two-minutes clip gives a good sense of the interactions played out at a prototypical djembe drum-dance event.

Since the microphones attached to the drums for the recording were cable-bound, the drummers did not stand up from their seated positions, which they probably would have done otherwise to more directly engage with the dancers. The good thing about this is that the sound quality is nicer than what you typically can capture at public live events. 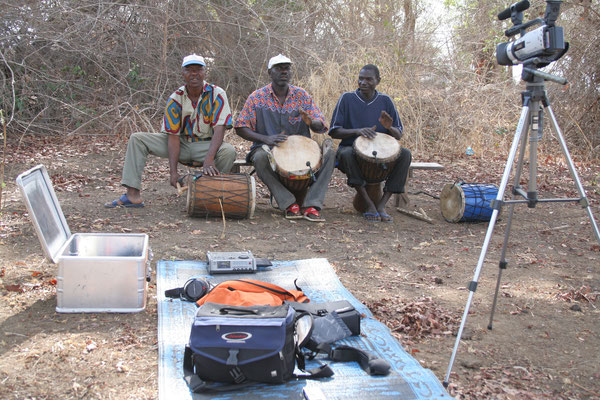 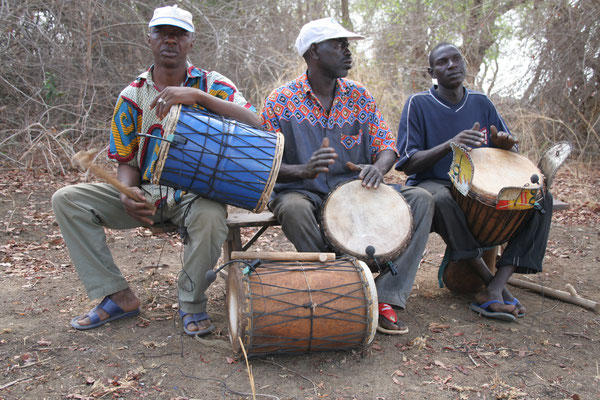 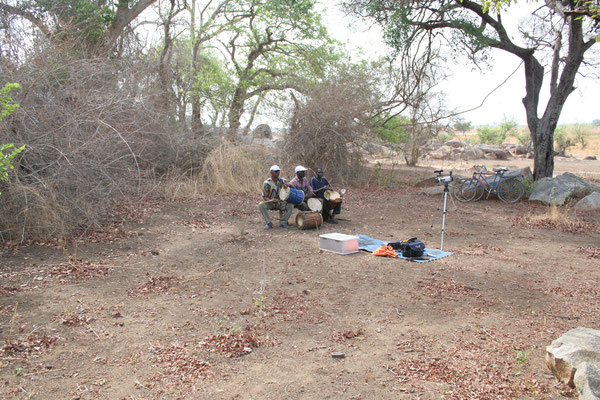 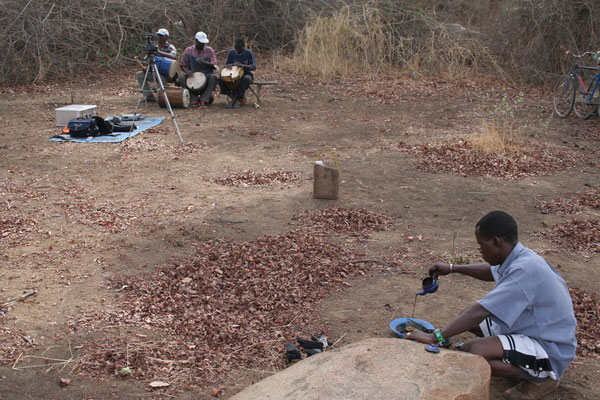 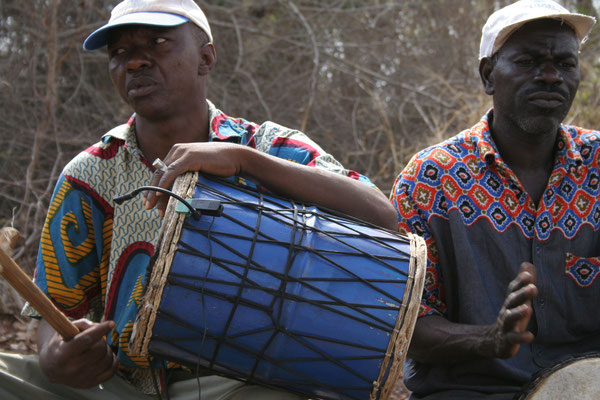 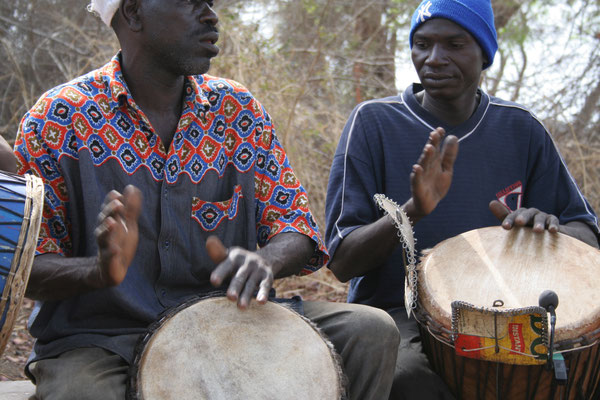 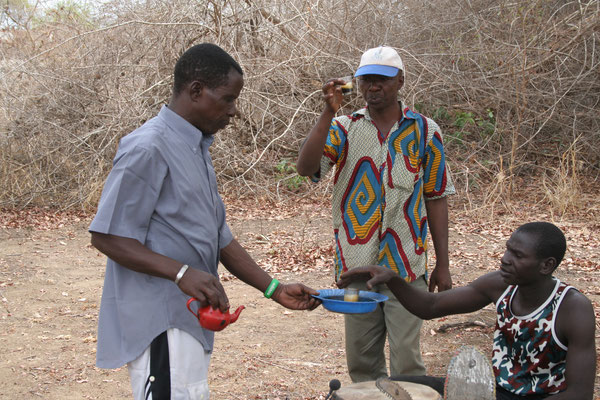 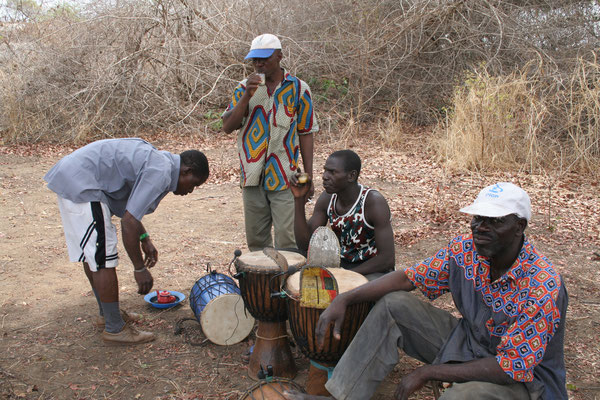 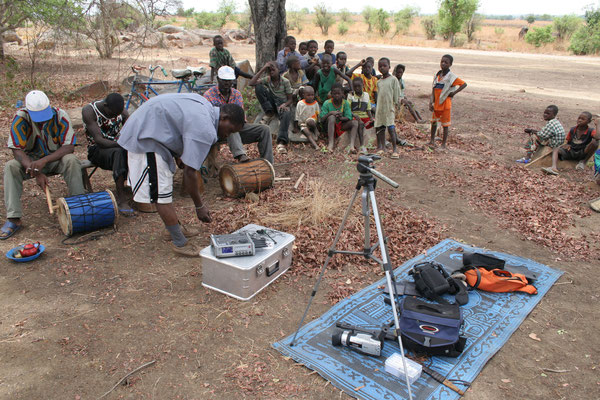 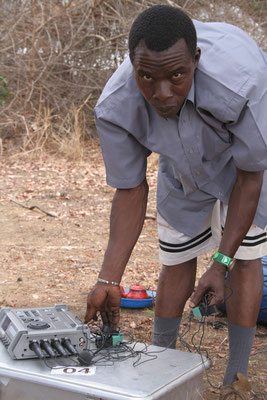 This is another effort to present in a condensed format some of the most typical formal aspects of multimodal interaction in djembe dance-drum events. The clip features a rough cut of three phases in a local wedding celebration. First, we have the procession of the bridegroom's familiy members with drummers and singers to the bride's family residence, where a celebration will take place. The piece played and sung in the minibus is "Tisanba;" hiring a minibus is typical of processions in Bamako, where locations often are too distant to reach on foot. Second, we have people engaged in a circle dance and then, third, solo dancing. The piece in both of these parts is Dansa.

´The players are Drissa Kone (lead-djembe), Sedu Balo (acc djembe), and Madu Jakite (dundun). The main singer is Sita "Ye" Diabate, whom you can hear on the audio album "Dònkili." Recording: Bamako 2006, by RP.

Live in the studio: Sogoninkun

This is a studio recording of the djembe piece, song and dance "Sogoninkun" performed by Mahawa Sidibe (song) and Maye Samake (dance) with the Sedu Balo Trio. This piece, too, is typical of the the region Wasulun. Sedu Balo: first djembe; Madu Jakite: first dundun; Alassane: second djembe. RP: recording, Bamako Jan 2012.

From a music-analytical and -theoretical perspective, it is interesting to note how  in Sogoninkun the subdivision is seamlessly changed from quaternary to ternary and back, in the course of performance. Listen to the changes at 2:43, 3:08, 3:46, 4:23, 8:24, 8:38, and again within three seconds at 8:41.

A duet studio recording of djembe player Isa Coulibaly from Kati and dundun player Madu Jakite from Bamako, shot in Jan 2012 in the city of Kati, where Isa has apprenticed and worked for all his career. The two players do not play together regularly, nor did they rehearse or discuss prior to the session, which makes all the more evident both their expertise and how belonging to a stylistic/repertorial community is important for improvisatory music practice.

Coulibaly is a respected professional drummer from the town of Kati, some 15km to the north of Bamako. He is a former student of Namori Keita from Mali, some of whose recordings were used as audio samples that accompany my book (see publications). His improvisatory playing is quite creative, full of hot surprises and expressivity on the one hand and coolness on the other. Twelve more recordings of his duet playing can be found in the audio album "The Art of Jenbe Drumming: The Mali Tradition, Vol 3."

In the piece Woloso-`Dòn (dance of the Woloso), swung binary and ternary beat subdivisions can be nested into each other and constitute a particular type of "open shuffle" groove.