I have apprenticed to master djembe drummers in Mali since 1991, during fifteen stays totalling some three years of time I have spent in Mali. My apprenticeship mostly involved performing the role of accompanist (second djembe or second dunun) at about 200 drum-dance celebrations, on occasions such as weddings and spirit possession ceremonies in Bamako or Islamic holidays and communal peasant work in the rural area south of the capital (Manden). I have used my immersion into the life-world and work-life of musicians as a radically participatory form of participant observation, that is, as a research method. However, learning from, and making music together with, Malian drummers has been a deeply rewarding experience in more than one respect. Furthermore, it goes without saying that however transforming fieldwork may be as a form of "second socialization", it will never make me a Malian musician. As a Bamankan proverb goes: As long as a log of wood stays in the water, it does not become a crocodile (jiirikuru mèn o mèn ji rò, a tè kè bama ye). 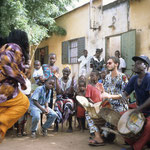 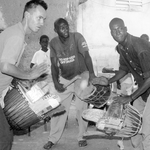 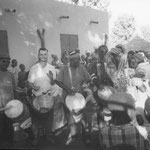 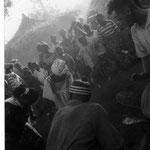 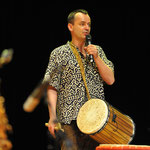 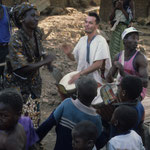 Teaching and playing at home

In parallel to my academic work, I have taught Malian djembe music to adults since the mid-1990s. From 2004 I have specialized in the professional development of  djembe players in the German-speaking countries. In 2006, I organized and co-directed a summer academy for djembe players at CODARTS Rotterdam and from 2012 to 2016 taught djembe ensemble practice at the Cologne University for Music and Dance. Next to teaching, I have organized and participated as ensemble member in concert and workshop tours of musicians from Mali, Burkina Faso, and the Ivory Coast. Sporadically, I have performed in cross-over bands and djembe-dundun duet projects; listen to some of the latter below.

Rainer Polak and Juerg Wohlwender play Bamako djembe repertoire (Bayreuth 2008). I am on djembe in kirin, jina-2, dansa, and sunun, and on kònkònin (dundun) in jina-1. Juerg makes the djembe speak in jina-1 and hits the kònkònin in the other tracks.