Khasonka (also: Khassonké, Xasonka) is the name of an ethnic group historically associated with the Khaso cultural/geographic region in western Mali. In present day Mali the administrative center of this region is the city of Kayes. Khasonka drum ensembles feature a variety of instruments, yet the most important, emblematic one is the dundunba or dundungo, a double-headed cylindrical drum with goatskin membranes. The player strikes the drum with a curved stick and has a bell fixed to his other hand, hitting the bell with an iron nut or ring slipped on his thumb.


The field recordings presented here are from Mahina, a small town some 80 km to the south-east of Kayes. Mahina is known for its lively tradition of Khasonka drumming. In Feb-March 2012, I spent a month living and studying with two leading professionals in Mahina, Koly Sacko and his younger brother, Toutou Sacko.

This is a public live performance of Khasonka drumming, song, and dance in the former village of Diallola, which today is a suburb of Mahina. The piece jelifòli or jelidòn ("rhythm/dance of the griots") consists of several distinct sections associated with different tempo ranges, two of which, Sandia (slow) and Sandagundo (fast), are sequenced to form a suite in this performance. The change between the two sections occurs at 7:45 min.

The fact that the performed piece is jelifòli implies that it is mainly jeli (members of the hereditary socio-professional group of griots) who feel addressed and invited to dance. Among the prominent dancers are Djati Kuyate and Adama Diabate.

Toutou Sacko and Koly Sacko were hired to play the Khasonka-dundunba. They belong to the status-group of griots themselves, as do the semi-professional singers Luntandi Danba, Dua Kanoute and Terema Kanoute. The players of the huge third drum standing on three feet, called tantango, are amateurs, by contrast. They were all members of the Diallola village community and frequently took turns at playing: Sambouba Sissoko, Mamadou Bagayoko, Kambon Sidibe, Francois Sidibe, Moussa Fayinke, Sambali Makalu, Modi Keita. Videographer: RP, Mahina in March 2012.

The singing was amplified by a megaphone that was driven by an automobile battery, as is typical of local practice. I clipped-on mics to the two dundunba-drums in order to bring across the bass-heavy sound of these instruments, which is hard to capture with a conventional stereo field-recording from a distance. Despite the obvious intrusiveness of this cable-bound miking, the drummers felt quite at ease, as you might get from the video, and were able to perform "normally," as they said.

Read more about Khasonka drumming, and see and hear more examples, in the music theory article "Timing and Meter in Mande drumming from Mali" (Polak and London 2014). Among the examples studied in this article are studio and live recordings of the piece "Bire," which also belongs to the jelifòli-suite.

This is a studio recording of a trio performance led by Koly Sacko on first dundunba (right) and accompanied by his brother Toutou on second dundunba (left) and Sambou Kante on djembe (center). Dansa is sort of a signature piece of the standard repertoire of Khasonka drumming. It shows an amazing increase of tempo, which in this performance is arranged in three parts that together form a suite. (In other local styles, the arrangement of the piece and accelerando is continuous, not in sections/stepwise.) In the second, mid-section (from 2:50), the open shuffle in the accompaniment and the short-medium-long swing in the ternary soloing is comparable to what we describe in the example of Bire in our article (Polak and London 2014).

I made the recording in Mahina in Feb 2012. Clipping a mic for each instrument here includes the dundun players' left hands for the bell. That may look weird, yet it did not disturb the players.

Some notes on music history

Historically, Khasonka-dundun-based and djembe-centered percussion ensembles marked distinct performance practices, repertoires and playing styles. While the Khasonka-dundun was associated with the ethnic group of the Khasonka, the djembe was associated with the Maninka and the Wasulunka. In Mahina's twin-town Bafoulabe, for instance, which is only 10 km from Mahina but whose population predominantly identifies as Maninka or Wasulunka, the main percussion instrument has been the djembe and was not typically mixed with Khasonka-dundun playing. In the context of the national and international popularization of the djembe, however, the two practices have started to merge since the 1960s, at least in the cities. In Bamako, a considerable portion of the urban djembe repertoire orginated from the Khasonka-dundun tradition (see Polak 2012). At urban weddings in Mahina, djembes are added to the dundun-ensemble today, whereas they tend to omit the more traditional accompanying drum, the tantango. Interestingly, Bamako drummers understand the Khasonka-dundun as a supplement to the djembe, while in Khasonka-land, drummers tend to conceive of the djembe as a supplement to the dundunba. When I once contributed what I thought were lead-djembe phrases at a performance in Mahina, a local dundunba player friendly agreed: yes, I like your style of accompaniment(!).

Some photographs and stills from Mahina 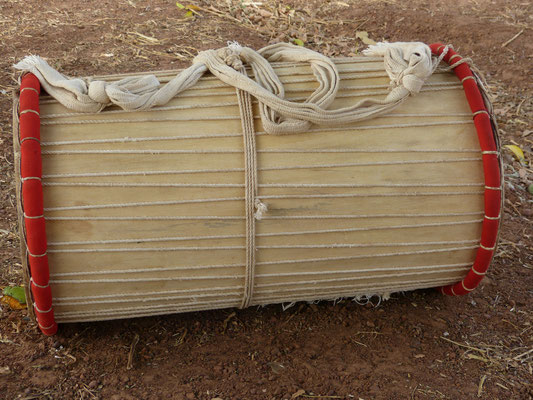 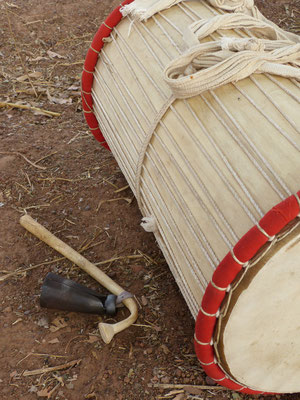 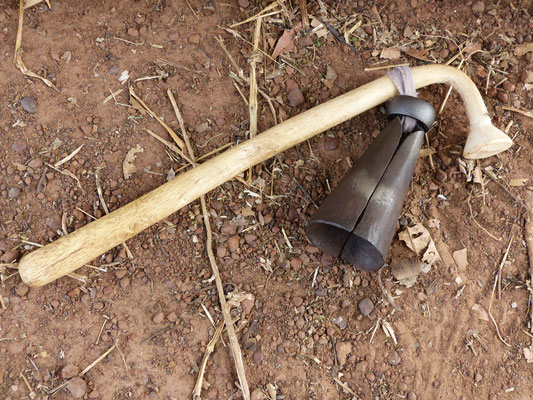 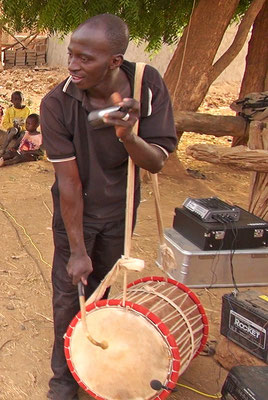 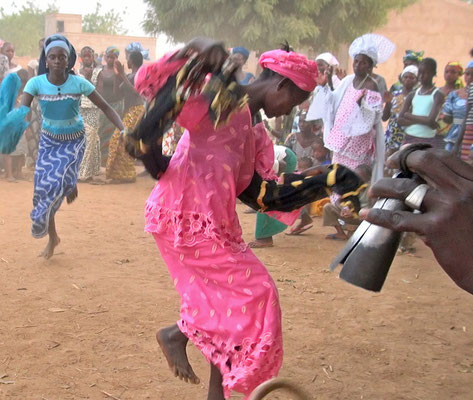 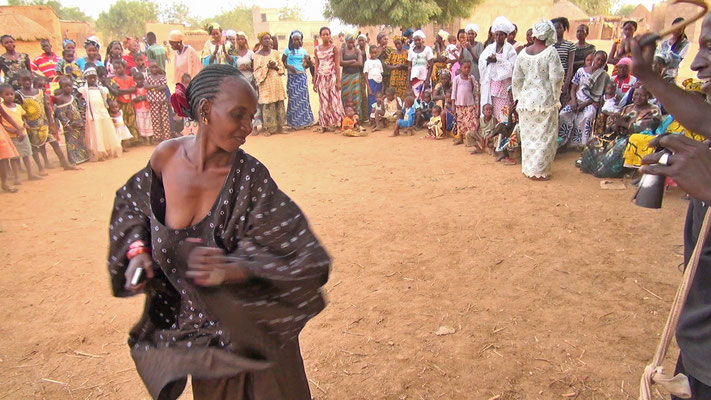 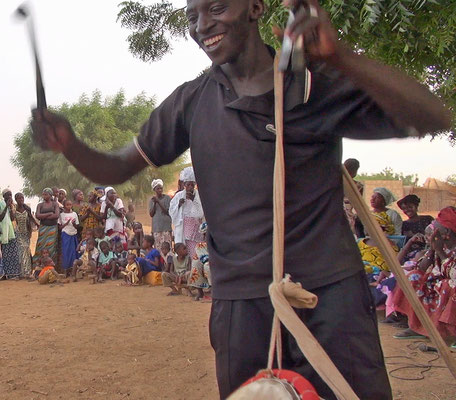 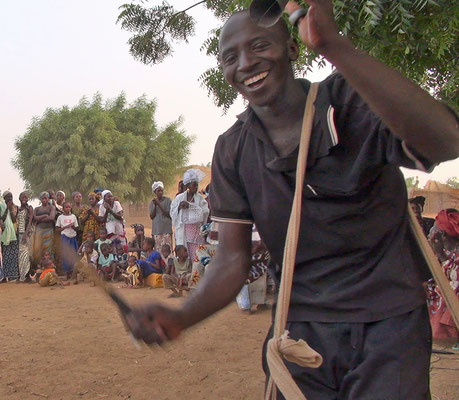 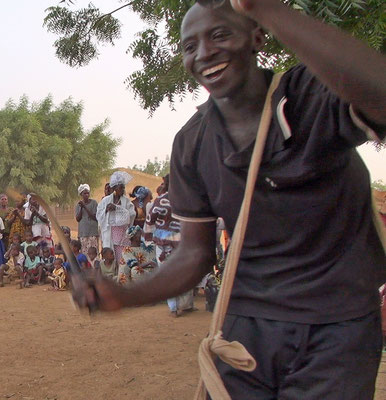 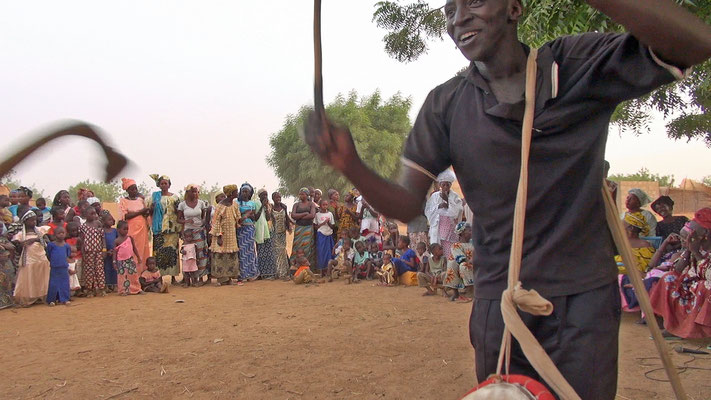 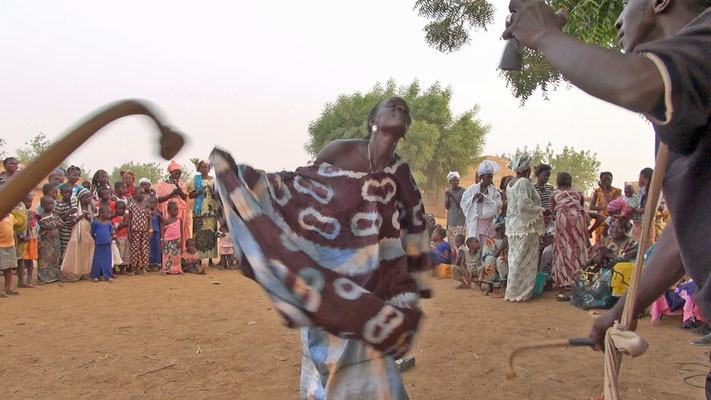 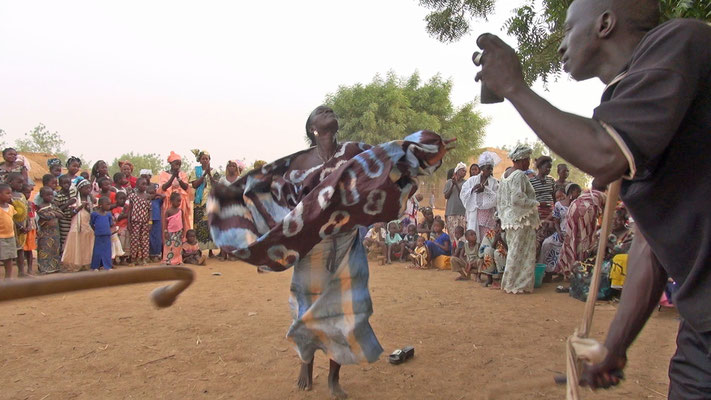 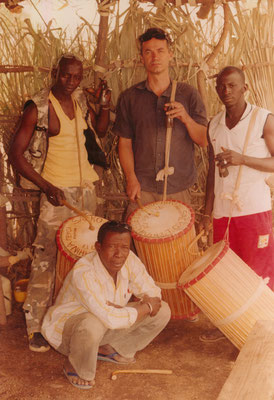